History of the design is a very interesting subject ,I think starting from one little sketch to massive memorial has influenced the design, same as new inventory that falls into designers hands. I looked at the creation reinforced concrete discovered in 1864 . With it strong and long lasting life qualities architects burst through the sky with out any obstacles and thus created the most famous city landscapes we now know. We had to create a time line with my peers of what we investigated and  what we discovered is that starting from the most basic invention as an alphabet that helped people to communicate ending with instagram of with one one of the man point is to connect people from all over the world its all about uniting people. Going back to the reinforced concrete, it brings the idea of Tower of Babel closer to reality, and the invention of internet has created the spider net where people don't have to speak the same language to understand each other.  Reinforced concrete made housing more affordable and building process faster , and as we all know time progresses extremely fast and now we learned how to 3D print whole buildings. I would definitely say that this session was my favourite, thinking and dreaming about Utopia is one of my favourite topics. There are multiple scenarios  future can take as optimistic and negative. For each individual utopian future is subjective and personal. For me the Utopia will happened when  human nation will stop consuming animal flesh and will start taking care of environment, when people will start taking care of the planet as they take care of their parent and  kids, educated society have to change their priorities from earning money to saving the planet and invest in their and their kids future. But there are other scenarios the future can take. As an utopia we had n example of Disney world in France where adults  who didn't work in the park where not allowed in wearing a costume because of how children react to cartoon characters and if dressed people act inappropriately like smoke or use graphic language  they can badly influents kids who's heroes are those characters.

As a great explanation of Utopia we had a quote-

I was introduced to a Pestal analysis the focuses on understanding how external factors can affect a design project or company : political/ economic/ sociological/ technological/ legal/ enviromental.

"The Future of Humanity is Robotics" - Faith Popcorn , futurist& founder of breainreserve.The discussion about future of design had to involve robots and machinery, as an example of great piar and poor design (in my opinion) we talked anout Elon Musk new released truck that failed a unbreackable glass test. The world how Elon sees it in future is utopia and as a contrast a netflic show 'Black Mirror' which show the dystopia world now.

After doing PESTAL analysis for my current project I came across idea that no designs are future because future is subjective. We think that we we know will be what will happened in future but since time is subjective all our designs are already in the past. Our environment is affected by politics that have nothing to do with culture and art and economics, when art and design always tries to influence both. I had a concern and fear that in future there will be no use in designers and artist and architects since artificial intelligence will take our jobs, but after a discussion with Gabriel I realized that even if AI will reach the level when it will not need any human control help it will still lack the ability to imagine science all the programs and information that it will have will be put in by humans. During the contextual practice we had to create fast models, I decided to imagine design that will touch on sociological aspects of our lives mainly the connection between mother and child, I think its critical for designs to create meaningful work that would influence not only  designers who are familiar with the subject but also the public who's banal point of view is easy yo manipulate. “All design should be human centred, it’s as simple as that. And I mean human-centred, not ‘user-centred’ or ‘user-friendly’, because users are human beings after all. But, more importantly, because being human-centred is not just about your user. Human-centred design takes into account every single human being that your design decisions impact on.”

I think that this quote is very important, some times I think people forget that designers exist to make human life easier , it should be humanized and practical , when artists, architects ,and designers create just for the art piece to be pretty the fundamental of the design is lost.

In my project I'm aiming to not only create a beautiful space but also a safe place in case of Tsunami. I'm working on the project 'Movement' where I'm designing a hotel on the coast that will be safe capsule in case of natural disasters. 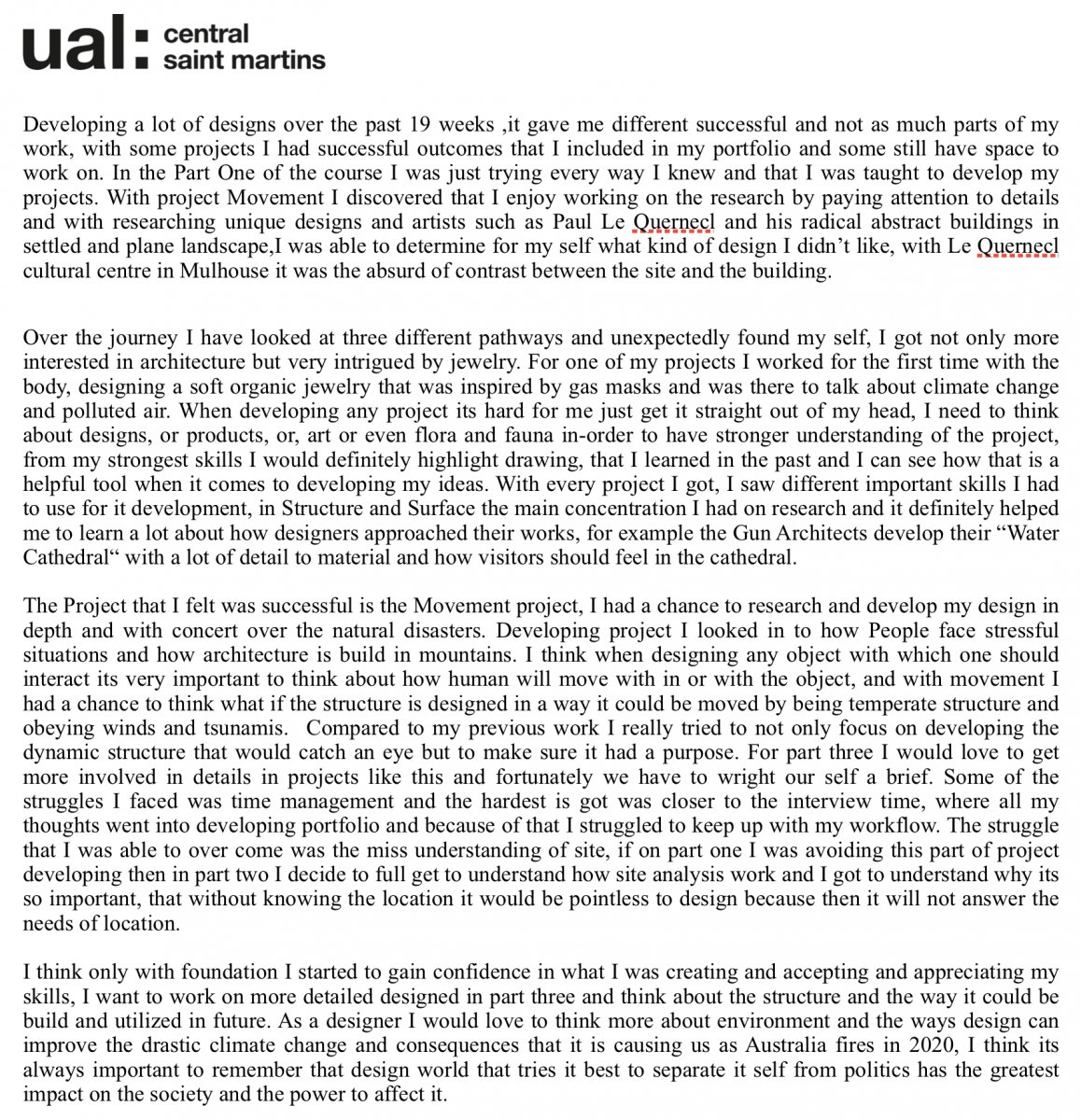 Stephen, E., 2018. The Age Of Glass: A Cultural History Of Glass In Modern And Contemporary Architecture. Bloomsbury Academic, An Imprint Of Bloomsbury Publishing Plc,.

On contextual practice we had to analize and work on our personal statement, I was working on finishing it but i faced a hard challenge to write a strong conslusion.

I have a few life rules, always carry a sketchbook and a pen, draw when ever I feel a desire to and be open to opportunities. Those rules I created in order to always generate ideas stimulate creativity and capture the world around. As a kid my favorite toy was always an empty shoe box and scissors I was trying to create new world that I was imagining but I didn’t have skills at the time. Growing up I was always interested in art, further I realized it wasn’t just art it was architecture.

Developing my interest in art I was attending a 7 years school in fine arts and I was able to finish it in 3 years, with a red diploma and as the best student of the year. The same year I was finishing my IGCSE and my focused was shifting from art school to art & design for IGCSE, this way I learned how to manage my time and quickly and efficiently communicate my ideas. After art school and while studying A level I was attending a foundation course in Stroganov Arts Academy where I learned about composition and ways to present my artwork. There I realized that even though I’m good at oil painting and portraits I’m more fascinated by architecture, I always was asking questions how is something like this is created how do architects generate ideas, that’s when I decided to attempt short course in Central Saint Marin’s on architecture portfolio. After the course I realized that this is what I want to do.

On my Foundation course I learned how inspiration it's all around and it's important to always notice it and document it in a sketch or take a picture. I want to develop a more detailed design in future that can be actually place in site and be seen not only as an art object but actually be occupied. Before foundation I never thought about relationship between architecture and the users, now I realized that it’s as important as site survey, people are the main reason we artists create. As a designer I would love to think more about environment and the ways design can improve the damaged by civilization ecology.

Foundation have changed not only the way I work on my projects but how research and work on model making, I have explored a range or material in workshops. One of the projects that spiked my interest the most was the Movement Project, the brief was about the need for movement based on a diversity of function and reasoning. I was inspired by Tiny Architecture and the concept of limited space, the beauty of architecture is the ability to manipulate the space in a way to satisfy needs of the people, and now with the overpopulation problem the world is facing today, Tiny Architecture is one of the solutions that humanity created. With every brief it’s important to not only meet customers need but to set little goals that only important for my own need. making every  project as different from each other as possible in order to learn new.

My recent brief  is about exploring Thresholds, I was driven by the political aspect of the project, and was motivated to look back at my ancestor. Now I’m exploring the connection between past and future of USSR and Russia, creating an elevated connection bridge between Embassy of Russia buildings, inspired by Vladimir Tatlin concept of constructivism.